In 1976 Tony began his coaching career as an assistant varsity lacrosse and football coach at Sleepy Hollow High School in New York. In 1978, after moving to College Station, TX, he took over head coaching responsibilities at Texas A&M Universities.

Tony is a native of Elmsford, NY and moved to Texas in 1978. He is retired from the City of College Station and currently works for the Texas Association of Sports Officials. Tony lives with his wife Sue An in Old Dime Box, TX.  They have two sons, one daughter and two grand-daughters. 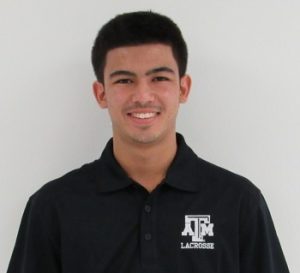 As a former MCLA player at Texas A&M and Allen High School Eagle lacrosse player, Cody joins the Texas A&M Men’s Lacrosse club staff for the 2020 season and will serve as an assistant coach and defensive coordinator for the Aggies.

Cody played midfield and defense at Allen High School and for Stickstar Lacrosse before moving onto playing for Texas A&M from 2015-2019. He has 15 years of lacrosse experience and is passionate about teaching the game.

Cody is a native of Allen, TX and is currently a graduate student at Texas A&M in the economics department. Cody will graduate in May of 2020 with aspirations of working in the finance industry.